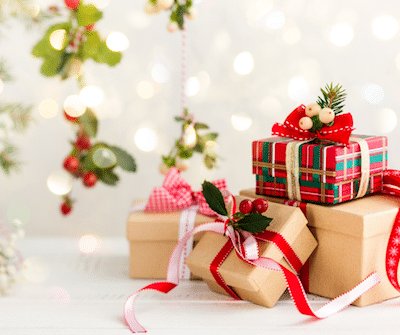 I know all about Christmas in England but, since working for VivaLing, I have found out about how Christmas is celebrated in other countries, too.

VivaLing teaches English, but we also teach Spanish, French, German and Chinese. So, today we are going to find out about a special Christmas custom in each of those 4 countries.

But first I would like to ask you a question. In many countries it is traditional to give presents to family members and friends. I am sure you would like to receive a big present this year, but what was the biggest Christmas present ever?

A The Great Pyramid in Egypt was a present from King Ramesses II to his son.
B The Sultan of Brunei (at that time the richest man in the world)gave his wife an aeroplane for Christmas – a Boeing 747.
C The Statue of Liberty was a Christmas present from France to the people of New York.

That is how you say Happy Christmas in Spanish, French, Chinese and German.

As always, I expect you to pay a lot of attention to this podcast. I am going to tell you about 4 Christmas traditions: one in China, one in France, one in Spain and one in Germany.

The difficult bit is that I am not going to tell you which tradition is from which country. You have to guess.

But just to get us in the mood, let`s listen to our special guest, yes, Father Christmas or Santa Claus, and hear what he has to say.

Hello, Father Christmas. Do you have a message for the listeners of the VivaLing English Podcast? Yes? Thank you. What is your message?

Number 1 – In this country it is a tradition to give people a very special present on Christmas Eve (December 24th). What makes this present special is that it is good for your health, it is not expensive and it is small. The gift is an apple. But why? In the language of this country, the word apple sounds similar to the word “Peaceful Night,” so an apple has become the symbol of Christmas, but where is it? France, Germany, China or Spain?

Number 2 – Christmas is a Christian celebration of the birth of Jesus Christ, and in many countries there are celebrations where Jesus Christ is represented by a baby. Most people know that the baby Jesus was a boy, but in this country the Christ child is always a little girl. Children write letters to the Christ child and receive presents if they are good. The Christ child wears a long white dress, has blonde curly hair and sometimes has wings. But where does this happen?

Number 3 – In some countries children receive their presents not on Christmas Day, but on January 6th, which is when the 3 Kings or wise men, Caspar, Balthasar and Melchior arrived with their gifts for the baby Jesus. In this country children receive their gifts on Christmas Day, but January 6th is also important for different reasons. People love eating a special cake called a “King Cake.” The family cut the cake up into pieces and, if you find the “bean” or a plastic crown in your slice, you become king for the day and wear a special crown. The cake is very nice to eat, but where does this happen?

Number 4 – In many countries it is traditional to make a nativity scene. This is a representation of the birth of the baby Jesus. In people`s homes, in churches and sometimes in town centres there are models of animals – the donkey, camels and sheep, Mary, Joseph and the baby Jesus and the 3 Kings. In one part of this country there is a special tradition. Included in the nativity scene there is always a man going to the toilet. He is normally hidden at the back, and the children have to find the “pooer” who has his trousers around his ankles. Please remember that it is not a good thing to go to the toilet on the floor. Always use a toilet. It is said that the poo is a natural fertiliser and will bring good luck to the baby Jesus. Strange. Where do you think this happens?

Let`s sum up our task for today:
4 countries – France, China, Germany and Spain.
4 traditions – the gift of an apple, a man going to the toilet in the nativity scene, King Cake and the Christ child represented by a little girl, but which happens in which country?

Congratulations if you got the right answers.

France – the King Cake
China – the apple
Germany – the Christ child
Spain – the pooing man, but not the whole of Spain. This is typical in the region of Catalonia.

Let`s find out more about Christmas in the next VivaLing English podcast, but before we do, we need to check the answer to the question at the beginning.

What was the biggest Christmas present ever?

A The Great Pyramid in Egypt was a present from King Ramesses II to his son.
B The Sultan of Brunei (the richest man in the world at that time) gave his wife an aeroplane for Christmas.
C The Statue of Liberty was a Christmas present from France to the people of New York.

Oh! But before we go, there`s another message from our special guest.