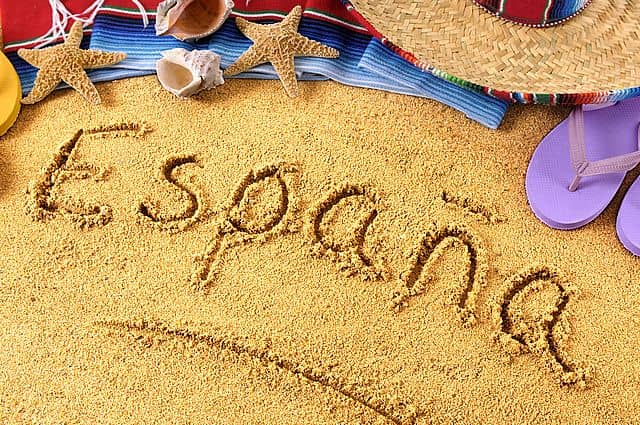 On today`s podcast, we are going to talk about one of the world`s favourite destinations … Spain.

What do you associate with Spain? Paella, castanets, great artists, bull fighting, the flamenco? These images may be a little clichéd, but how important are they for people who actually live in Spain?

In today`s podcast, two VivaLing English coaches who live in Spain, Paloma and Amy, will talk about the places they love in Spain.

But first, I have some questions for you.

Is it true that more people in the world speak Spanish as their first language than English?

What is Spain the world`s leading producer of?

What does Spain have 8,000 kilometres of?

In order to help Amy and Paloma, I am going to give you some facts about Spain as an introduction. Pay attention because sometimes I get confused and make mistakes. Please try and notice if there are any mistakes in my introduction.

Spain receives more tourists per year than any country in the world except France. Most of the tourists go to Spain in the spring and summer to ski on the beaches in warm weather on the Mediterranean Coast. Many more enjoy visiting historic and cosmopolitan cities such as the capital Valencia and cities like Barcelona and Madrid on the north coast, but Spain is not just about sun and culture. You can go swimming in the mountains in the winter, taste wine in its many vineyards or take part in fun festivals such as the carnival in Venice.

I hope you noticed that you can’t ski on the beaches in the summer or swim in the mountains in the winter. It`s the other way round. Madrid is the capital of Spain, not Valencia, and it is in the middle of the country, not on the north coast. Oh, and by the way, the Venice carnival is in Italy, not Spain.

But, before we do, I want you to pay attention to some words that they use in their descriptions.

Who uses these words and what are they describing?

Spain is quite overrun with tourists all year round, especially if you go to the big cities like Madrid, Barcelona, but I would say the north of the country, Galicia, Asturias, Cantabria, the Basque Country are the best places to visit because they`re not hot and dry like people might imagine all of Spain to be. They`re actually quite rainy and cold in the winter and summers are mild, so it`s a very good time to visit. The scenery in the north of Spain is beautiful, and it’s actually very similar to the British coastline with lots of cliffs and green hills, and a curious fact about Spain is that it is the country with the most biosphere reserves by UNESCO due to its environmental and scenic diversity.

Hi. I`m coach Amy. I`m from Liverpool in the UK but I live in Spain. One of my favourite places in all of the country is the town of Cazorla where I live. Cazorla is located in the south of Spain in the region of Andalusia. It is a typical old Spanish town with small, narrow streets and painted white houses. It also has 2 beautiful Moorish castles that sit on top of the hills looking out over the town. On one side Cazorla is surrounded by olive fields, and on the other side it is surrounded by mountains and thick forest. It is the entranceway to three connecting mountain ranges. Cazorla, Segura and Las Villas, and it is a place of great natural beauty. Here you can go on many different hikes through the sierra where you will find waterfalls, rivers and lakes, and you can see all kinds of wild animals including eagles, deer and vultures.

Thank you, Amy and Paloma.

Here are the words I asked you to pay attention to.

Mild is how Paloma describes the summers in the north of Spain. This means they are nice and warm – not too hot.

Narrow is how Amy described the streets in her town. It means they have a short distance from one side to the other. Only one car can drive down a narrow street at one time.

Hilly is how Paloma described the north of Spain. Hills are like small mountains.

Overrun is when there are too many people in one place. Paloma says that the big cities in Spain are overrun with tourists.

Moorish – is how Amy describes the castles. It means they were built by the Moors, a group of people from North Africa who ruled the south of Spain for many years.

Thick is how Amy described the forest. It means there are a lot of trees in a small area.

Lots of cliffs – this is how Paloma described the coastline in the north of Spain. A cliff looks like a mountain which goes straight into the sea.

Wild is how Amy describes the animals. She mentioned eagles, deer and vultures.

It is almost time to say adios, but before I do, let’s check the answers to my questions from the beginning of the podcast.

Is it true that more people in the world speak Spanish as their first language than English?

YES. More people speak English as a second language, but Spanish is spoken by 450 million people.

What is Spain the world`s leading producer of?

OLIVE OIL. Spain produces about half of all the olive oil produced in the world, maybe some of it from Amy`s town.

What does Spain have 8,000 kilometres of?

BEACHES. One of the many reasons so many tourists love to come to Spain.

Ratonzito Pérez is the Spanish equivalent of the Tooth Fairy. Spanish children leave a tooth under their pillow at night, and Ratoncito Pérez replaces it with some money. He was created in a story written for King Alfonso XIII in 1894.

That is the end of this podcast. Why don’t you write a description of your favourite place in your country and send it to the VivaLing English podcast on our social media.