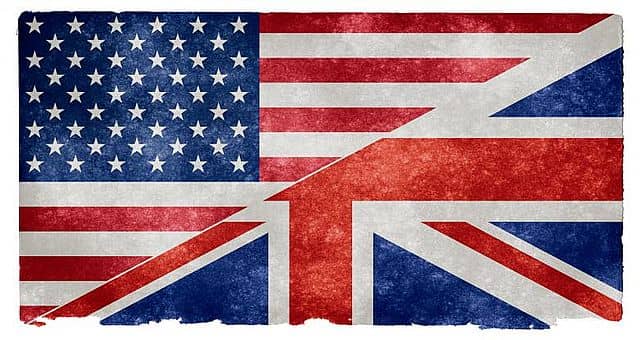 As the famous writer George Bernard Shaw said many years ago, “England and America are 2 countries separated by the same language.”
As any Brit visiting the USA will tell you, the United States is a country where everything seems familiar, but you suddenly notice that it is also completely different.
This can be because of customs, food and very often language.

First, a little bit of history. The Mayflower was one of the first ships to bring English colonisers to America. In 1620, 132 English people travelled to what is now Massachusetts. Only 53 managed to survive their first winter. The colonisers from England are an important part of American culture.

My question is: what percentage of Americans today believe their family is descended from those 53 people: 15%, 25% or 50%?
Think carefully. As usual, the answers will be at the end of this podcast.

It doesn`t matter if you are going to have more contact with American or British speakers of English. It is a good thing to be able to understand both. After all, you may have the chance to travel in either of these countries, and there will be some British films you will love and some American movies you might also love. By the way, this is an example of a word which is different in the US and the UK. The word “movie” is more common in the US, and the word “film” is more common in the UK.

I want you now to listen to the same story being told by an America and a Brit. You will notice that most of the story is the same, but some words are different. Try and identify how many different words there are. I will go through them at the end.

This Amy with the American version.
“Yesterday, I had to go to the drugstore to buy some diapers and candy for my son. Every fall I clear out the garbage in my yard, so I emptied the trash can into a bag and put it in my trunk, which I was going to drop off on the way back. It was smelling pretty bad. I was wearing these old sneakers and pants because I`d been working in the yard. When I was leaving the drugstore, I needed to go to the restroom. When I had finished, I went outside and I had a terrible surprise. My car was nowhere to be seen. I called the cops, but they didn`t do anything. In the end, I had to take the subway back home in my dirty old pants and sneakers. Everyone was looking at me like I was some kind of hobo. And the funny thing is I can`t help thinking about the trash in the trunk. Will it still be there if I get my car back?”

This is me, with the British version.
“Yesterday, I had to go to the chemist`s to buy some nappies and sweets for my son. Every autumn I clear out the rubbish in my garden, so I emptied the dustbin into a bag and put it in my boot, which I was going to drop off on the way back. It was smelling pretty bad. I was wearing these old trainers and trousers because I`d been working in the garden. When I was leaving the chemist`s, I needed to go to the loo. When I’d finished, I went outside and I got a terrible surprise. My car was nowhere to be seen. I called the police, but they didn`t do anything. In the end, I had to get the underground back home in my dirty old trousers and trainers. Everyone was looking at me like I was some kind of tramp. And the funny thing is I can`t help thinking about the rubbish in the boot. Will it still be there if I get my car back?”

Ho!Ho! What a story! The amazing thing is that only in this short story there are 13 words that are different.
Let`s go through them to see how many you got.
Tom and Amy

the place where you buy medicine:
chemist’s / drugstore

special protection for babies who can’t control when they go to the toilet:
nappies / diapers

the season between summer and winter:
autumn / fall

the place where you put rubbish:
a (dust)bin / trashcan

the back end of the car, where you can put objects:
the boot / trunk

shoes specially designed for relaxing or for sport:
trainers / sneakers

an article of clothes that you wear on your legs:
trousers / pants

the area outside of your house where you can sit down and relax:
garden / yard

another word for the toilet:
loo / restroom

the professionals responsible for keeping the peace and law and order:
police / cops

an unfortunate individual who lives in the streets:
tramp / hobo

There are, of course, many other differences, but these are the most common.
One of the most interesting things about languages is that they are always changing. American English influences young people in the UK through films, social media and music. As a result, many young people use words like “guys” and “movies” and reply to, “How are you?” by saying, “I’m good,” something that 20 years ago was considered wrong.
But the influence goes both ways. Americans also enjoy listening to British accents. An expression like, “Bob’s your uncle” (used to finish simple instructions — “How do you find my house? Go to the end of the street, turn left and Bob’s your uncle”) is as recognisably British as “double whammy” (when 2 bad things happen at the same time — “He never recovered from the double whammy of losing his job and his home”) is American, and they all have their charm.
The different expressions enrich our language and contribute to the fact that English has the largest vocabulary of any language in the world.

Let’s get back to the original question at the beginning of this podcast.
What percentage of Americans believe their family are descendants of the original settlers from the Mayflower: 15, 25 or 50%?
The answer according to a very special survey is 25%, which would mean that 82 million people in America are descended from these English pilgrims.
In fact, it is estimated that between 10 and 35 million people really are descendants of those 54 survivors, which is still pretty impressive. It is also one among many reasons there is such a strong link between our two countries and our languages.