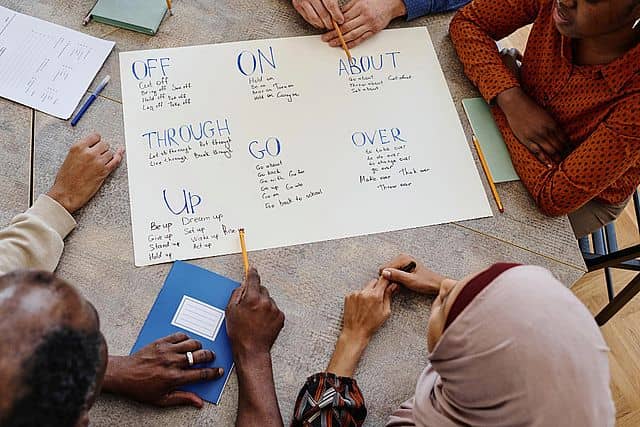 My name is Tom, and it’s a pleasure, as always, to speak to you.

I’ve been working with English for many years now, and I’ve often heard students say about how English is a simple language, far easier than French or Chinese or Portuguese, for example.

But then I say to them, “What’s the difference between getting round to something and getting round something?” or “Why do you get in a car but get on a train?”

The combination of common verbs such as put, run or do with prepositions such as up, round or through, which create their own sense, is something known as phrasal verbs.

Sometimes the meaning can be deduced – or worked out – by understanding the individual word, for example, he fell down the stairs. Some people refer to these as prepositional verbs, but sometimes the meaning is not logical, such as he took up cookery last month, which means he started a new activity or hobby.

In today’s podcast, let’s look at some curious facts about phrasal verbs and learn some new ones to show off to your friends.

There is a secret challenge that I took up at the beginning of this podcast, and I’ll tell you what it is at the end.

Let’s start by listening to a brief story.

John set off at seven in the morning. He slipped out of his home because he didn’t want his wife to cotton on to what he was getting up to. However, as he was picking up speed on the road out of town, he was pulled over by a policeman. The policeman spelled out to him that he would have to get out of the car. He took out his wallet and handed over £50 to the startled copper. “Don’t try and buy me off! I’ll have to put you away until you’re an old man.”

But it was too late. John couldn’t get out of it now. He’d got carried away and messed up his own life. His poor wife was going to have to get by on her own now.

When you realise there were 16 phrasal verbs in this short story, it’s no surprise to learn that the English language is estimated to contain up to 10,000 phrasal verbs.

See if the story is easier to understand now

John started his journey at seven in the morning. He left his home quietly because he didn’t want his wife to realise that he was doing something bad. However, as he was increasing his speed on the road out of town, he was told to stop by a policeman. The policeman explained to him that he would have to leave the car. He removed his wallet and gave £50 to the startled copper. “Don’t try and bribe me! I’ll have to send you to prison until you’re an old man.”

But it was too late. John couldn’t escape now. He’d lost control and destroyed his own life. His poor wife was going to have to survive on her own now.

Which version do you prefer?

I wouldn’t say that one version is better than the other. One of the skills that a proficient speaker of English should have is to be able to change your register to suit the circumstances.

In general, we use phrasal verbs more in relaxed and informal settings. So, if I told this story to my friends in the pub, it would be closer to the first version, and if I told it as part of a business presentation, it would be closer to the second version. Knowing phrasal verbs helps you to speak more or less formally depending on the situation.

I will give you the definition, and you can try and give me the phrasal verb before your time runs out. Don’t worry if you don’t get all of them right.

To leave a place quietly is to ………. Slip out

To realise or understand what is happening is to ………. Cotton on

To do something which might be bad is to ………. Get up to something

To increase speed is to ………. Pick up speed

To stop your car at the side of the road is to ………. Pull over

To explain something clearly is to ………. Spell something out

To remove something from your pocket is to ………. Take it out

To give something to someone else is to ………. Hand it over

To bribe someone is to ………. Pay them off

To send someone to prison is to ………. Put them away

To escape an obligation is to ………. Get out of something

To lose control and get too excited is to ………. Get carried away

To destroy or spoil something is to ………. Mess it up

To survive in a difficult situation is to ………. Get by

Wow! Are you still there? I’m still here.

As you can see, there is a vast variety of phrasal verbs to learn and remember, but there are some useful tips which will help you keep control of your learning process.

Remember that phrasal verbs usually have an alternative in more formal English. If you say postpone instead of put off, or remove instead of take out, people will understand you perfectly well. The most important thing is to understand phrasal verbs and not necessarily to use them yourself.

In most situations a combination of the context and your knowledge of the components may help you deduce the meaning of the phrasal verb.

“It’s too windy to play tennis today. I’m going to have to call it off.”

Even if the phrasal verb “call off” is new to you, you can probably guess that it means to cancel or postpone. The correct meaning is to cancel.

You will notice phrasal verbs when you are listening and reading all the time. Don’t just gloss over them (that’s a nice phrasal verb) but actively welcome them to your vocabulary notebook or vocab app on your smartphone such as Wordstore. It’s a very good app which allows you to create your own personal dictionary.

Nobody knows all the phrasal verbs in the world. I don’t because people are making them up all the time, and only some of them catch on. Here we go again. Catch on mean to become popular.

How many of the most common phrasal verbs in English do you know?

If you understand these, you will definitely be able to learn more.

You can turn on the television or turn off the TV.

You can find something out about a new subject.

You can or you must get up in the morning.

You should give up smoking. It’s bad for you.

And if I were you, I’d throw away those old shoes.

I’m looking forward to seeing you next week.

Look after your pets. They need loving care.

These are 10 of the most common phrasal verbs.

If you have understood them, then you can understand more. Make it your target to learn a new phrasal verb every week or every two weeks. I suggest that you go to the transcript of this podcast and make a list of five phrasal verbs that you would like to use in your conversations.

Remember, I told you about a challenge at the beginning of this podcast. My challenge was to try and include 50 phrasal verbs in this podcast. Look at the transcript. Count them and see. Did I succeed?

Hey! We’ve pulled it off – a podcast with phrasal verbs and you are still listening. Well done and looking forward to the next podcast. 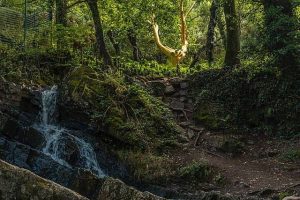 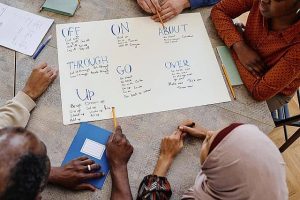 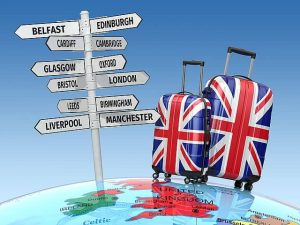