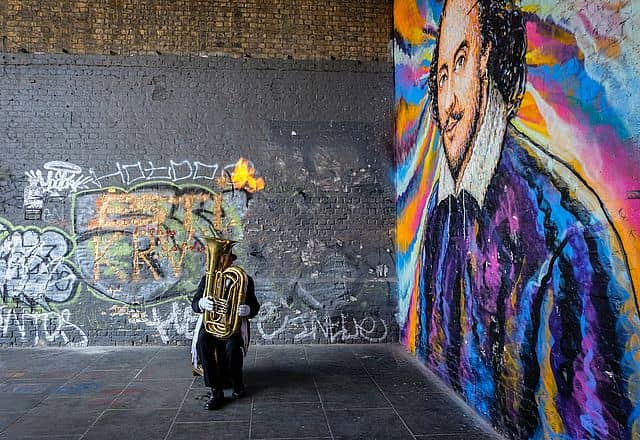 All about Culture : William Shakespeare

In today’s podcast we are going to learn about a man who has influenced language, literature and art all over the world – some say the greatest Englishman of all time – William Shakespeare.

Isn’t it a bit boring to talk about a writer who lived 500 years ago? Who cares about all that fancy language? The theatre is old-fashioned and irrelevant.

But – think again. If William Shakespeare had been alive today, he would be a mix between Brad Pitt, Walt Disney and Stephen King. Why? Because he created art, which was popular, meaningful and versatile.

But as usual, let’s start with a question. Here are three facts about William Shakespeare, but one of them is not true. I made it up. What do you think?

Many English words were seen for the first time in his plays, for example: bandit, critic and even lonely. Let’s focus on the play Henry VI, Part 2. Amongst the battles, the plots and the romance, we see the first use of the word “bandit” in the English language.

A bandit is a type of criminal who operates in a gang or band with others. Nowadays, it sounds a bit old-fashioned, but Shakespeare could never have imagined his word would be used in the phrase “one-armed bandit.” This is not a physically handicapped criminal as you might imagine, but a fruit machine, like you see in a casino. You put in coins, you see the fruit and it usually takes your money. That is why they’re called one-armed bandits. The “arm” is a type of lever you had to pull on the first fruit machines to make the dials spin.

Many other expressions used today originate from Shakespeare’s plays.

Hamlet is a classic story of murder, ghosts and mental breakdown, a precursor to today’s psychological thrillers. It is also where we see the phrase “Cruel to be kind” appears for the first time. Sometimes you have to hurt somebody in the short term in order to benefit them in the long term. This is being “cruel to be kind.”

When you are next speaking to a friend in England, you might ask them to explain a complicated document or what someone else has said. If your friend says, ”It’s all Greek to me,” it doesn’t mean that you have given him a Greek document by mistake. It means that your friend understands nothing. Shakespeare created this in the play Julius Caesar – a Roman Emperor who ironically could understand and speak fluent Greek, as well as Coptic and Oscan (Thank you, internet – I didn’t know there was such a language as Oscan).

“Romeo, Romeo, wherefore art thou?” The play Romeo and Juliet is probably Shakespeare’s most famous. Among the suicides and murders, we also see the introduction of a new expression or two. One that I particularly like is to go on “a wild goose chase.” We use this today to describe an impossible task. My wife really wanted that new Ralph Lauren limited edition handbag. I spent the whole day looking around all the shops in London, but it was just a wild goose chase.

Hold on. Let’s see if you have been paying attention.

What three expressions and word were created by Shakespeare?

See if you can finish the word or expression before me.

Well done if you won the race and, if you didn’t, well, I was being cruel to be kind.

One thing that not many people know is that the presence of millions of birds in the United States of America is because of Shakespeare. The starling is a common bird in England and in Europe. It is a speckled brown bird which gathers in enormous flocks in the autumn. If you live in Europe or America, you have probably seen one of these. They are called murmurations.
Eugene Schifferlin was a German immigrant to the United States. He had 2 great loves – birds and Shakespeare. His life project was to introduce all of the birds mentioned in Shakespeare’s plays to the United States of America. That was about 90 species. Some of them were already there, but starlings weren’t. As a result, he released 60 starlings in Central Park in New York. The starlings adapted so well that it is estimated today there are now more than 200 million living in the United States.

What was Eugene Schifferlin? A genius, a madman or an ecologist? Feel free to discuss this with your VivaLing coach.

And now back to my original question.

Here are three facts about William Shakespeare. One of them is not true. I made it up. What do you think?

When Shakespeare married his wife in 1582, she was already 3 months pregnant.

80% of British people have read or seen a Shakespeare play. OR…

Shakespeare would be very rich if he was alive now, but during his lifetime he was always poor.

The correct answer, my dear listener, is the first 2 sentences are true. The last is false. Shakespeare was, in fact, very rich during his lifetime and was the richest man in his town Stratford upon Avon.

It’s nice to know that talent, ability, hard work and creativity were rewarded well even many years ago.