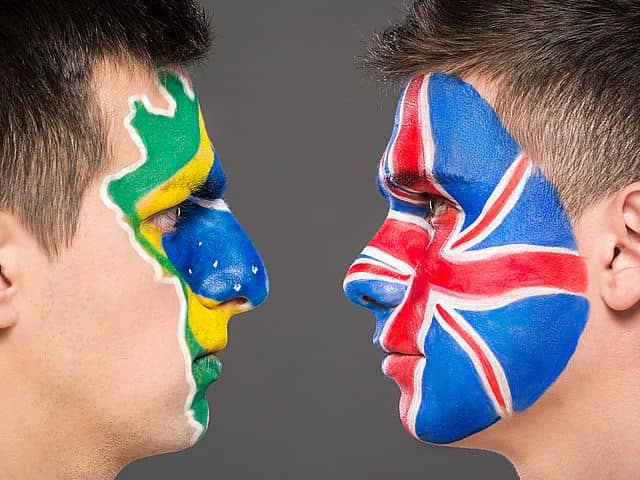 Sports – past, present and future !

Sport is a very important part of many people’s lives. And even if you don’t like sport, it’s hard to deny that it has a very high profile in today’s culture.

In today’s podcast we will talk about the past, present and future of sport.

As usual, however, I would like to start this podcast with a challenge – a sporting challenge.

Here are 3 facts about popular sports, but are they true or false?

Football (or what the Americans call soccer) was illegal in England from 1314 to 1660.

In the Paris Olympics of 1900 Pigeon shooting was an event. The winner of the gold medal managed to kill 21 pigeons.

Golf is the only sport to have been played on the moon.

Think about it. All will become clear later.

Now, for a quick march through time, pay attention as I might make some mistakes. Here are some key dates and facts related to the evolution of sport.

The earliest representations of sport can be seen in cave paintings such as in the Lascaux Caves in China, which show running and wrestling competitions nearly 15,000 years ago.

It is believed that the Ancient Egyptians played a number of sports around 2,000 years before Christ. Images of athletics, archery and rowing have been found on the tombs of kings such as Henry the VIII and Elizabeth I.

In Ancient Greece the first Olympic Games were held in 776 B.C. The games were held every 4 years, and competitors competed in sports such as running, throwing the javelin and bicycle racing.

The Industrial Revolution and the spread of European colonisation contributed to the increased popularity of team sports around the world. Cricket, football, rugby and tennis were all played across the five continents.

The highest ever attendance for a football game was for the World Cup final in 1950 between Brazil and Uruguay. 210,00 people filled the Maracanã Stadium in Rio de Janeiro and celebrated Brazil’s first victory in the competition.

The final of the American football Super Bowl is seen as the biggest money-making sporting event in the world. In 2020, a 30-minute advertising slot in the half-time interval cost $5.6 million.

I hope you were paying attention. Did you notice my mistakes? There were six.

The Lascaux Caves are not in China but in France.

Henry VIII and Elizabeth were not Egyptian kings. They were English. And Elizabeth wasn’t a king at all. She was a woman, so she was a queen.

Bicycle racing was not an ancient Egyptian sport, but chariot racing with a horse and a wheeled vehicle was.

Tennis is not a team sport. It is an individual sport.

Brazil didn`t celebrate winning the World Cup in 1950. The champions were Uruguay.

The $5.6 million advertising slot in the Super Bowl was not for 30 minutes. It was for 30 seconds.

Well done if you noticed all of them.

I did promise that this podcast would be about the past, present and future of sport, but so far, I have not mentioned the future.

During the coronavirus pandemic, professional and amateur sport has been interrupted in a way not seen since World War II, but will it return in the same way soon, or can we expect to see significant changes in the way we watch and play sport?

Here are two of my predictions.

I think the trend for bigger stadiums will reverse, and live events will take place in smaller stadiums, which can create a better multimedia atmosphere that does not depend on real-life fans.
I think the Olympic Games will start to get smaller, not bigger, and consist of non-prestige events such as breakdancing, speed climbing and surfing.

What do you think? Make your own two predictions about the future of sport. You can either share them with your VivaLing coach or on our Facebook or Instagram page. I look forward to seeing your contributions.

And don’t forget to use the future forms ‘will’ or ‘going to’ if you’re making predictions about the future.

Before we finish, what about the answers to my questions at the beginning of this podcast?

I asked you if these three facts were true or false.

Was football illegal in England from 1314 to 1660? No. A number of kings banned football for different periods of time because they wanted people to concentrate on archery skills, which were considered more important and also because, in those times, football created disorder and problems of violence. Some might say much like today.

The second was about the Paris Olympics of 1900 in which 21 pigeons were killed by the gold medal winner. Unfortunately for the pigeons, that is true. I think it’s a good thing that pigeon shooting is no longer in the Olympics.

Thank you for listening. I hope you have learned something new about sports today – past, present and future.