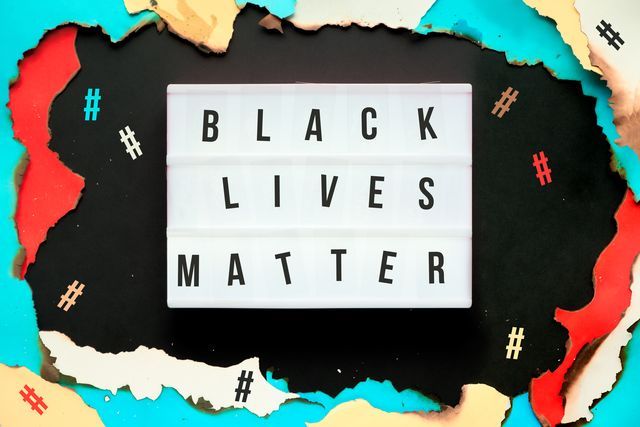 The VivaLing English Podcast likes to use contemporary issues as a way to encourage you to learn English and to learn more about what is going on in the world.
Over the last month, many people around the world have been discussing the movement of Black Lives Matter and the importance of the wave of protests related to this.

But what is Black Lives Matter (BLM)?

Why, when and where was it created, and what are its aims?

We will also look at the experience of our coaches at VivaLing and see what we can do as individuals to make the world a better place for everyone, regardless of ethnic origin.

But, as usual, let’s start with a question. What percentage of white people in the USA in 1958 said they would move house if a black family moved into the house next door? And what is that percentage today?
The answers at the end of this podcast.

Black Lives Matter is an organised movement which focuses people’s attention on examples of police brutality against the black community in the USA.
It was started as a response to the shooting by the police of Travyon Martin in February 2012. This year, the movement has attracted further attention as a result of the killing of George Floyd by Minneapolis police. It started as an American movement, but now has followers all over the world.

In the US, these include :

Discrimination is the unfair treatment of groups of people, for example, due to colour, age, gender, sexuality or religion.
At times, especially if we are not directly discriminated against ourselves, we may not realise how serious a problem this is. Because of this, it is important to listen to the stories of people we know to realise that it is important for everyone to be aware of this problem.

VivaLing is an online language academy, and we employ coaches from all over the world with many backgrounds.
Here is what two of our coaches had to say about their experiences.
Listen carefully and answer these questions.
The first part is easy. Where are Miska and Jillian from, and how do they identify?

“Hello. Hi everybody. My name is Miska Singlee. I am a 55-year-old woman from Cape Town, South Africa. And, as you might know or not know, I am also a coach at this wonderful company VivaLing. I am a Muslim, a person of colour and an epileptic, too. ”

“Hello. My name is Jillian Chambers, and I’m from a little sunny paradise called Jamaica, home to the famous Bob Marley and Usain Bolt. I’ve only ever identified as my nationality, but now that I am living in Japan, I identify as a Jamaican woman of colour.”

Yes, Miska is from South Africa and Jillian is from Jamaica. Notice that they both use the expression “person of colour” to identify themselves. This is an expression which is not offensive and is used to refer to somebody who has a non-white ethnic background.

Next, let’s see if we can understand what they say about discrimination

Before we listen, here is some key vocabulary:

A headscarf is a piece of material worn around the head either to stay warm in cold weather or by women of the Muslim religion.

Miska
“Before working for VivaLing, I worked for quite a few Asian companies and, being a woman of colour and Muslim and having a disability, I was faced with many awkward and emotional confrontations. As a Muslim woman, wearing a headscarf is a means of honour and protection and on many occasions, while working for Asian companies, I was told to remove my headscarf or lose my job. Now, when it is your only income, you feel hopeless. I felt completely humiliated, but what choice did I have? However, coming to VivaLing has changed all of this because I am so happy. I’ve never ever ever ever felt like I needed to answer to anyone about who I am.”

Jillian
“My identity was never an issue in Jamaica. We are taught that black nationalism, black pride and self-determination are some of the core tenants that makes us who we are as Jamaicans. I have lived in America and the UK, though, and my experiences have been in some situations hateful and vile. Now that I am living in Japan, I have experienced a somewhat double-edged sword. On the one hand, I am as exotic as an Aki fruit, but in other cases there is an undercurrent of disapproval and passive aggression by others toward me who see the colour of my skin as an issue.”

Thank you, Miska and Jillian, for sharing your experiences with us.
You will notice that Miska talked about the headscarf. She mentioned that working as a teacher in some companies, she felt humiliated and hopeless because she had to remove her headscarf. This is an example of discrimination, which now at VivaLing she is happy not to suffer.
Jillian mentioned the “double-edged sword” because, as a black woman living in Japan, she is exotic, but at the same time she feels many people disapprove of her. She has also experienced hateful situations in the UK and USA.

At VivaLing, we like to think that we give equal opportunities to all

We also educate our learners in a way to discourage any type of discrimination, but we can always do more.

What can you do to help eliminate discrimination?

Remember that a small action today will influence others, and you will be taking part in a positive chain reaction to bring discrimination closer to its end.

But, before we finish, let’s return to the question at the beginning of this podcast.
Remember:
What percentage of white Americans in 1958 and today said they would move home if a black family moved on next door?
The answer is that, in 1958, 40% of white Americans said they would move, and today the figure is 1%.
I mention this because it’s important to realise that some progress has been made. There are still many problems in the world, but the progress that has been made must be recognised so that we can address the present and the future with confidence.
Thank you for listening. Goodbye !