You are here: Home / Technology

At the recent EdTechXAsia 2016 event, an eminent speaker confirmed what all have been witnessing: contrary to initial fears, technology has not replaced teachers. But, he warned, “teachers proficient with technology will very soon replace those who are not.” The speaker knew what he was talking about : he was none other than  Dr. Janil Puthucheary, Minister of State at the Ministry of Education of Singapore, the country that topped all global PISA rankings in 2016.

The digital leap and the rise of the (good) teacher are two of three current mega trends that we previously explored while reflecting on the future of language learning.  These two phenomena are intertwined. With the coexistence of Man and Robot, there will be dramatic adjustments and power shifts. There will be winners and losers. At this stage you may be wondering what to do to remain off the endangered species list. 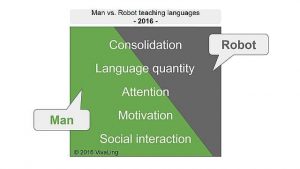 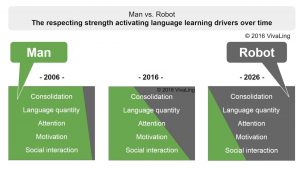 Teachers are not naturally equipped with these skills, and are not sufficiently prepared to embrace their human advantages in traditional teacher training programs. This is why programs such as VivaLing’s VOLT-YL  for teaching languages to children online are progressively preparing them adjust to the fast-changing teaching paradigms.

According to the professionals who participated in the new 2025 Education Innovation Survey Report *, in 2025 the key methods of engaging with material and content will evolve to be real-time video collaboration and mobile devices. What are the 5 key trends for the future of education? VivaLing would like to share the main takeaways of this report with you. 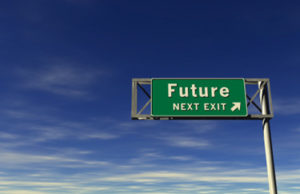 Accessibility for all those who want to learn is considered to be the most important factor in the future of education success. Schoolprofessionals from around the globe (25%) ranked accessibility above all other factors; this view was most pronounced in respondents from the UK (31%). In the context of education, accessibility refers to the geographical aspect: that distance is overcome in order to deliver education to where it is needed. Convenient access to education is also factored in: that students and professionals have the ability to learn anywhere and at any time.

67% of school professionals consider the focal point of education delivery to be the teachers and lecturers themselves.  However, the use of remote learning technologies in teaching is expected to rise significantly: 53% of professionals believe real-time video collaboration and mobile devices will be the primary way students engage with content by 2025. Despite this shift, many professionals still believe that the teachers and lecturers will continue to play an important mentoring role in 2025.

“By allowing an engaging, accessible, and cost-effective approach to education, technology opens up the prospect of higher education, personalized courses, and teacher-training to a much broader population.”

A majority of teaching professionals across the globe are convinced that the main focus, after deregulation and revised compliance standards, should be on improving the quality of teacher learning. Those in North America (18%) and in India (21%) feel that the creation of a more personalized and contextual learning would also be worth focusing on. 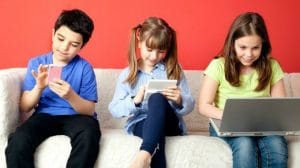 According to 47% of the people interviewed (the majority being from North America and the UK) online access to content and lectures is what students and parents are demanding more of, from the   institutions.

NB: This survey covers mainly North America, United Kingdom, Australia, New Zealand and India. The rest of Asia is not covered.  However the trend towards online education in Asia is much stronger, especially in China.

* 2025 Education Innovation Survey Report by Polycom. More than 1,800 people from a range of professions within the education industry participated in the survey, with more than 80% above the age of 30. The majority of response comes from North America, United Kingdom, Australia, New Zealand and India. The majority of participants were management and c-suite (26%), educators (47%) and those in administrative roles (27%).

Babies are born universal listeners. In the first months of their lives, they can discriminate all the sounds produced by human beings. It is no small feat: you and I cannot. A typical Japanese adult is unable to hear the difference between an English /l/ and /r/. A typical English adult cannot detect the nuance between Mandarin /ɕ/ and /t͡ɕ/. The various /k/ and /q/ sounds in native American languages are not discriminated by non-Indian American adults. And Catalan mid-vowel contrasts (/e/, /ɛ/) are difficult to perceive even for adult Castilian-speaking Spaniards.

Babies keep listening. And while listening, their brains take statistics on the languages spoken in their environment. What happens towards the age of 1 is an incredible linguistic transformation. Babies get better at discriminating the sounds of their own language (native contrasts); but they completely and irremediably lose the ability to detect the sound differences present in other languages but irrelevant to theirs (non-native contrasts). The age of this transformation is known as the critical phonetic period. It is the clearest of all language critical periods.

Incredibly, before they reach that period, babies can be trained in other languages. In her memorable 2010 TED Talk, Patricia Kuhl describes how twelve sessions delivered by a Mandarin speaker to American babies had the same effect as ten and a half months of native Mandarin speaking on Taiwanese babies: at the end of the experiment the two groups were equally good at the perception of Mandarin contrasts.

Two more miracles are to be highlighted. First, the baby brain is a social one. If the baby is exposed to other languages’ sound contrasts by a recording, be it a full video or just an audio track, their performance is as bad as if there had been no training at all. But if the baby is trained by a living person, then the capability to perceive contrasts becomes as good as if the baby had been a native speaker. Sarah Roseberry, a  researcher in Patricia Kuhl’s lab, demonstrated in 2011 that the social impact is felt irrespective of the person’s physical presence or not : a Skype-like online, synchronous video interaction will have the same effect.

The second miracle is how adults could figure out whether babies perceive or not the sound contrasts. Babies, obviously, cannot speak, do not understand what the researchers are looking for and could not express consciously the results anyway. In a 2009 video, Derek Houston summarizes three common methodologies historically used to investigate infant speech discrimination skills :

–          High Amplitude Sucking (HAS) : sensors measure the amplitude and speed at which a baby sucks a pacifier. When different sounds are played (and perceived as different) the sucking response changes.

–          Visual Habituation Methods (VHM) : when habituated to a given sound, babies’ looking time at a visual display tends to decrease. A sudden increase means babies have detected a novel sound.

Today scientists increasingly resort  to electrophysiological and neural imaging techniques, as mentioned in Kuhl’s video. This gives us a direct glimpse at what is happening inside the brain, and whether or not sound contrasts are perceived.