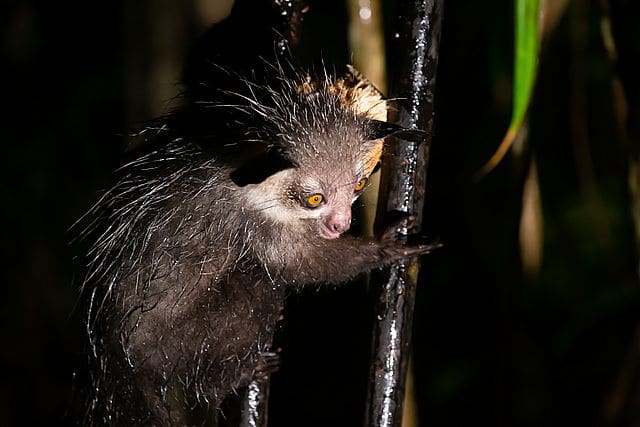 It`s important to learn more about strange animals all over the world. The more we know, the more we can help them.
Find out more about the mysterious aye-aye from Madagascar and listen to some ideas about how you can help endangered animals.

Imagine you are walking through the forests of Madagascar… at night. The jungle sounds echo from the trees to the floor. You know that some animals are dangerous. You are afraid.
Suddenly you hear a noise. You shine your torch into the trees, and 2 large yellow eyes stare back at you. The mouth of the beast opens and sharp teeth are visible. Then you watch in fear as the animal opens its hand, and one long finger points straight at you. Oh, no! It’s pointing at me! What does it mean?
You run fast and are back home safe and sound.
But what was it?
Let me give you a description of this mysterious beast.

The aye-aye is a lemur, one of those typical monkey-like animals that only live on the island of Madagascar, but it doesn’t look like a lemur or a cute monkey. Its about the size of a large cat. Its fur is a dirty greyish-brown. It has large pointed ears and crazy mad yellow eyes. It’s certainly not beautiful, but the strangest thing about it is its hands. It has six fingers, but the middle finger is three times longer than the other fingers, ideal for pointing at people.
There are 2 possible reasons for the aye-aye to have this strange appearance.
Which do think is true?

This is the first reason.
The aye-aye is an animal with magic powers. When it looks at people with its special yellow eyes and points its long finger at them, it means that person will suffer from misfortune. Maybe this person will die. If an aye-aye goes to your house, you must leave the house and never come back. If you see an aye-aye near to your village, you must kill it. If you don’t, then everybody in the village will be in danger.

This is the second reason.
The aye-aye has large ears which help it listen out for insects inside the trees. He has crazy yellow eyes because he is nocturnal. That means he is active at night. And the finger??? The finger is for him to tap on the trees like a woodpecker, and to make holes in the wood to pull out the insects, which he then eats.
Which reason do you think is true?

The first reason is what the people of Madagascar have always believed. The second is what the scientists who study the aye-aye have concluded.
Sadly, most of the country people in Madagascar don’t believe what the scientists say. They still have the same superstitious beliefs from the past and, as a result, the poor aye-aye is killed because people think that it is an animal that can cause bad luck. The also think it might steal their food.
As a result, the aye-aye is now considered in danger of extinction.
But don’t despair. Where there is life there is hope. If you are curious to see what an aye-aye looks like, go onto the internet. Type aye-aye (spelling) into Google and have a look at a photo. If you think it’s cute and not ugly, there are things that you can do to help.

Conservation is important and animals need our help. Here are some things you can do:
1. Protecting wildlife is not just about exotic places like Madagascar. Find out about the animals that live near you and join a local conservation group to help them.
2. Only visit zoos and wildlife centres if they are actively involved in conservation. You can find this out by checking on their website. Many zoos have a captive breeding programme where animals can have babies, which can then be re-introduced to the wild.
3. Keep control of your family’s carbon footprint. Drive and travel less. Recycle and re-use more. Don’t buy food or products with too much plastic packaging or that come from a long way away.

Sometimes we think that, as individuals, especially if we are young, we cannot make a difference, but remember maybe a little girl in Sweden called Greta Thunberg thought the same thing, and now even global leaders such as presidents and prime ministers have to listen to her.
So, let’s do the right thing. Talk about what you can do to help the aye-aye and other endangered animals with your family and your coach. You can post your ideas on the VivaLing Instagram or Facebook page. We can encourage each other to really make a difference.
Our friend, the aye-aye, will thank you.
Thanks for listening… bye

Attribution to Caroline Ford for the sound effect “sound of someone eating” attribution 3.0 licence. http://soundbible.com/976-Eating.html