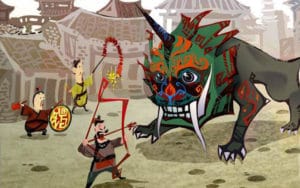 An ancient Chinese legend about the origin of chuxi tells us that there was a monster called Xi. Xi would emerge from the sea on the 30th day of the 12th lunar month to dine on the locals. No one would dare sleep that night until, at last, they learned that the monster could be driven away by putting up red paper and setting off ﬁrecrackers. Since chu means “to get rid of”, the Spring Festival Eve was known as chuxi, meaning “to get rid of something”.

Have a look at a great video about this legend

The custom of pasting Spring Festival couplets, setting off ﬁrecrackers and staying up late at night is thus observed till the present day

The history of the character “福”

The character “福” is often seen pasted upside down during the Spring Festival. Do you know why?

After the emperor of the Ming Dynasty, Zhu Yuanzhang, ascended to the throne, he secretly told all the people who had helped him to paste the character “福”, which means good fortune, on their doors. He would then kill those who hadn‘t put the character up by the second day. Aﬂer discovering the plan, the kind-hearted Empress Ma asked every family in the city to paste the  character before dawn hence eliminating the disaster. Thankfully the people listened to her.

Empress Ma then hurriedly explained to the emperor, “The family must have learned Your Majesty will come today, so they put the character “福” upside down”. The clever Empress Ma knew that when spoke in Chinese, “upside down”, has the same meaning as “good fortune has arrived”.

The emperor fell for her explanation and didn’t kill the family. A disaster was avoided. From then on, people have put the character “福” upside down, meaning “good fortune has arrived”.

What’s on the menu for Chinese New Year?

What’s on the menu for Chinese New Year?