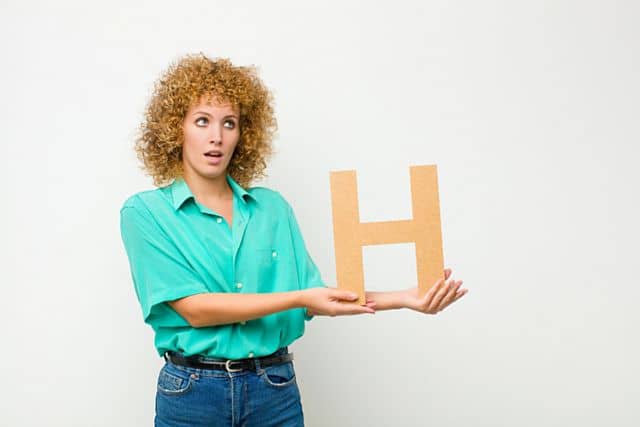 The letter H is important to pronounce correctly.

But where does it come from? And what is aspiration?

Find out this and more with Tom’s excellent tips and a little but of history and culture – all related to this letter of the alphabet.

Hello – how are you?

Today I’d like to talk about the most controversial letter in English – the letter aitch – or should I say haitch?

Let’s start with a simple question – when do we use the indefinite article an and a in English?

Is it a vowel or a consonant?

– in general we must consider the letter H as a consonant – that is why we say a house – a holiday – a hospital and a honeypot… but why do we say AN hour – because hour begins with a silent – or non-aspirated H.

Your challenge at the start of this podcast is to think of any other words in English that begin with a silent H – like hour – I will give you a list – at the end of this podcast.

At VivaLing we teach 5 languages.

Mandarin is a Chinese language with a different alphabet so we can discuss that another day.

But in German, French, Spanish and English we will find the letter H.

French and Spanish are together in this battle because the letter h is always silent – although the French do have a difference between aspirated and non- aspirated h, it affects the way words are connected and not the pronunciation of the letter itself. We can leave that to the French team to explain in their podcast.

German is our friend however

The h is aspirated just like in English, and this has been important for the development of our language.

Hold on hold on! What are you talking about? What’s all this business of aspirated and non aspirated?

Here is a definition from Wikipedia – an aspirated sound is produced with an exhalation of breath. So if you hold your hand in front of your mouth and say PIN – you will feel the breath on your hand. That is also why I use a pop-filter to make this podcast – (a pop-filter consists of a piece of material which you hold over the microphone to prevent sounds becoming distorted when they are aspirated, and you are speaking in front of a microphone) Listen to the sound POP – with and now without the POP filter.

Let’s go back in time and think about where the actual letter came from – like many things in English, we have to thank our neighbours the French for this. Ironic, since they typically have difficulty pronouncing it correctly. The name of the letter comes from the French word hache – which means axe in English and is supposed to resemble the shape of the miniscule or lower case letter H.

We then used it as a letter to add to the beginning of Germanic words that were already pronounced with the aspirate such as house and hound.

Danke to our German friends and merci to our French friends

My advice to you as a student of English is to practice saying sentences that contain lots of aitches, such as “Harry the hungry, hungry hippo is happily eating ham in his house. Hurl the hairy horse up the hill!.”

And be careful with these 2 words – hole and whole. Two words? One word.

Well it is in fact 2 words because whole – as in complete spelt with a wh is pronounced in exactly the same way as hole with an H, which is an absence of matter. Can you think of any other words like that – of course WHO and whom. Well, not exactly the same because they don’t exist with an H, but they are examples of the WH pronounced as an H.

Who is that strange man?

And to whom should I give the book?

Both spelt with WH, but only the h is pronounced.

Let’s listen to someone else saying those tongue twisters – “’arry the ‘ungry, ‘ungry ‘ippo is ‘appily eating ‘am in his ’ouse. ‘url the ‘airy ‘orse up the ‘ill ”.

This is the reason why – people with many regional native English accents don’t aspirate the H – so if you go to London you might hear some people saying “‘e’s got an ‘at on ‘is ‘ead”, instead of “He’s got a hat on his head”. These dialects which drop the H are often considered as not proper and are associated with the lower social classes – hence the controversy – and many parents tell their children

If you are French, Spanish or Italian my advice is to try and aspirate your aitches.

The most important thing is to be clear in your pronunciation – imagine if people don’t understand whether you said harm or arm – hairy or airy – art or heart they are very different words and could lead to a misunderstanding.

And what about pronouncing the letter itself ?

how do you actually say H when you are spelling a word?

Is it aitch or haitch?

They are generally people who have regional accents associated with the lower social classes. As a result, articles get written in newspapers about how terrible this is – and the fact that it may lead to the collapse of civilisation and the end of the world – maybe it will but I hope not. Well , I ’ope not.

I will say 2 sentences – you try and notice which sentence, number 1 or number 2, contains the letter H.

Number 2 contained the letter H.. It was Tom Hill. Not Tom ill.

Sentence 1 had an H. It was a heel, as in the back part of your foot. Not an eel, the long slippery fish.

Number 1 contained the H. hearing means your ability to hear. An earring is a piece of jewellery that you put on your ear.

Fantastic if you got them all right.

Oh no. What was my question at the beginning of this podcast – I can’t remember – but I do remember the answer

Maybe now you remember the question –oh yes – which words apart from hour begin with a silent H in English?

I’m sure you know what honour and honest are. Heir is a confusing word. It’s spelt H-E-I -R, and means the person who is going to inherit something important, for example, money, a property or a position, such as the King or Queen of England.

Who is the heir to the throne of the United Kingdom now?

Well it was Prince Charles, but now he is King Charles, so the correct answer is – Prince William is the heir and not the hair to the throne, although he does have hair.