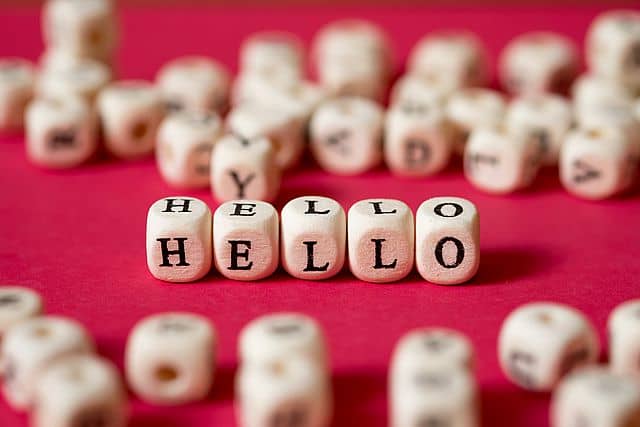 In today`s podcast, we are going to look at the origin of the terms we use today to say hello and goodbye, when and why people started using them.

But first I have a question for you.
People say that the word “hello” became popular because of which invention….

Sometimes people ask me in what situation it’s right to say HI or HELLO.
Hi is more relaxed and informal than HELLO. You say HI to your friends and family and HELLO to people you know less, but there are no real fixed rules. Intonation is very important. If you are in a formal setting and you greet someone you don`t know with HELLO but using unfriendly tone of voice, “HELLO,” this can be rude. Equally if you greet an older person with HI but like this “HI,” this would be appropriate.

Howdy is used mainly by people in the southwest of the USA – especially Texas. If you use this, some people might laugh because they will think you are a cowboy.

Traditionally in many countries people often shake hands when they greet each other. Of course, this is much more dangerous these days because of COVID-19.

So, why don`t we look at other greetings around the world and decide which of these we could use until the end of the pandemic, but pay attention. There might be some new words.

Tibet: stick out your tongue to say hello. An ancient 9th century king called Lang Darma was famous for being cruel and for having a black tongue. So, Tibetan monks like to stick out their tongues to show that they are not his reincarnation.

Zimbabwe and Mozambique: clap your hands to say hello. In these countries, the first person claps once. The second replies by clapping twice. Be careful! Women must clap with their fingers and hands at an angle. Men clap with their palms aligned.

Malaysia: put your hand on your heart to say hello. In this country, after lightly holding the other person`s right hand, you put your own hand over your heart and bow to show respect.

Before taking a vote to see which greeting you like the most, let`s check if you have understood the following words.

Cruel is the opposite of kind, when you are not nice to people; for example, if you see a child in the street eating an ice-cream and you steal the ice-cream, that is cruel.

Reincarnation is what some people believe happens after you die. You return to the earth as a different person.

Clap is to hit your hands together to make a noise, sometimes done because you appreciate what somebody has done.

Palms are the part of your hand in the center.

The heart is the organ that controls the flow of blood around your body.

Bow is to move your body from the waist upwards down to show respect.

I personally like the Malaysian greeting, but be careful with the Tibetan greeting because if you stick your tongue out – in some countries this is very rude.

So much for HELLO – what about GOODBYE? And what does goodbye mean?

Goodbye is an abbreviation of “God be with you.” You can shorten this to BYE or just say, “See you.” Farewell is a nice and formal way to say goodbye.

In Russia, there are 2 traditions that are related to saying goodbye.
Which of these three is not true?

– In Russia, when someone leaves your house, you must not clean up their room until a day has passed as this will upset their energy.

– In Russia, you must always give somebody money when you say goodbye to them.

– In Russia, before you leave your house, you must sit in silence for 1 minute.

I like all if these but, in fact, just the first and third are true. Don’t worry. If you are in Russia, you don`t need to give people money when you say goodbye.

Before I say goodbye, let`s sit in silence for one minute. ….. No, sorry. Let`s go back to my initial question.

Two famous inventors were involved in creating the telephone, Alexander Graham Bell and Thomas Edison. Mr Bell wanted people to say “ahoy” when answering the phone. Mr Edision suggested “hello.” As we know now, it was Mr Edison`s suggestion which was more popular, and since then the word HELLO has become one of the most popular words in the English language.