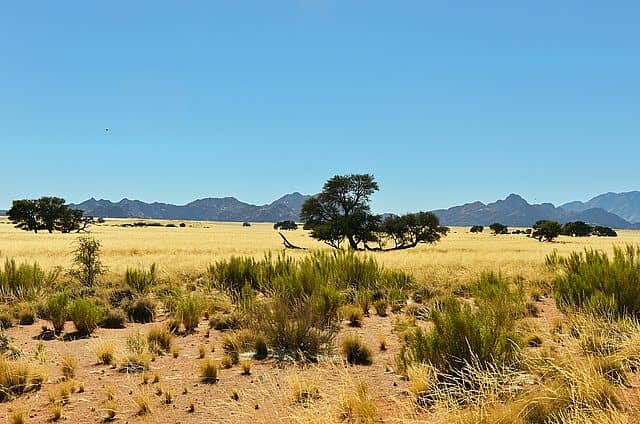 EN Podcast: All about South Africa

All about South Africa

South Africa – What a place!

In the VivaLing English podcast, we like to focus on places that have a connection with VivaLing. And South Africa certainly does – as many of our coaches come from this beautiful country.

In this podcast, we will listen to two of them talk about what makes their country special and learn some interesting facts about the country and the way people speak English there.

But before we start, let’s look at some questions.
South Africa is famous for its beautiful landscapes and wild animals.
Many people talk about the Big Five. This term was originally created by hunters to list the five wild animals it was most difficult to kill. Thankfully nowadays, it is used by tourists and wildlife enthusiasts for the animals people want to see.

But which of these animals make up the Big Five:
Crocodile, hippopotamus, lion, buffalo, giraffe, elephant, leopard, hyena, gorilla or rhino?
Make a list, and I will give you the answer at the end of this podcast.

But that`s enough from me. Listen to 2 of VivaLing`s South African English coaches, Catherine and Dean, talk about their country. I asked them 3 questions.

What makes South Africa a unique country?
Where would you recommend people visit in South Africa?
and
What South African words or expressions are used in English?

Listen carefully because I will be asking some questions at the end.

Catherine
South Africa is certainly a unique country in which to live, or in Mzanzi as the locals call it. It is called a Rainbow Nation because there are many different people, cultures and religions living in this country. One of my favourite places to visit is most certainly the Garden Route. The Garden Route is a beautiful 200-km stretch of coastline in the Eastern and Western Cape provinces in South Africa. It boasts many pristine beaches and beautiful landscapes. You can also visit places like Monkey Land, Birds of Eden and discover beautiful animals whilst travelling on the N2, which is the road down the Garden Route. In terms of food, we have many interesting cuisines, the most popular being what we call the braai fest, which is any kind of meat (or anything at all, really, that you can find in your household) which is then braaied, which means to be cooked on an open flame. In terms of expressions that we use in South Africa, I would say the most common are “Ja ja” which means, “Yes, I know” loosely translated. We often say, “Now-now.” For example, “I will do that now-now.” Unfortunately, now-now means any time between the next two minutes or in a year. So, no one actually has any clear indication of when the job will actually be done when somebody says, “I will do it now-now.” Another expression that we seem to use quite often is using the word “Ag shame.” We would say, “Ag shame.” We use our shame for many things. Shame should essentially be used when somebody falls down or somebody has done something rather shocking and it is a shame, but in South Africa we would use shame for, example, a very cute child. You would look at the child and say, “Ag shame.” It is rather strange but yes, those are some of the facts about South Africa.

Places to visit – I think coming to South Africa or being in South Africa, you have to visit the Kruger National Park at least once in your lifetime. It’s a very special experience to see so many wild animals in a protected natural environment and obviously the famous Big Five. So, yes, that I would say is the best place to visit, and then pretty much anywhere along the west coast of South Africa is really beautiful, as well.

Expressions in South African English – It’s actually quite a funny one. My wife and I spoke about this one for a bit. There are, actually, a few funny ones, for example, “braai.” It`s actually Afrikaans, but it’s pretty much used throughout the South African culture and language experience. “Shot bru” to say thanks. That`s also another funny one that we have. And then we use “robot” instead of traffic lights in South Africa. So yeah, there’s a few ones. “Lekker” for if something is nice. So, we`ve got some nice slang phrases here in South Africa. So yeah, it’s a really special place for many different reasons. I enjoy it. I enjoy the languages. I enjoy the people. South Africa is a crazy country, and it`s fun to be here.

Shot bru to you, Catherine and Dean, and I hope you, listener, were paying attention.

It’s a road you can travel down to see the Garden Route and many beautiful sites.

What word do both Catherine and Dean say is very common in SA?

Is it a bad thing if someone looks at your dog and says, “Ag shame?”
No. Ag shame, strangely enough, is a positive thing in South Africa.

Where does Dean say you can see the Big Five?

What do people in South Africa mean when they stop at the robot?

I hope now that you will be able to understand this. “I was driving to my friend`s braai fest when I stopped at a robot. I was a bit late, but I told my friend I would be there now-now. When I got there, he introduced me to his kids. I said, “Shot bru for the braai and ag shame, what lovely kids.”

But to finish off today, we need to go back to our original question.

What animals are the so-called Big Five?

They are —– lion, leopard, buffalo, elephant and rhino.

So, congratulations if you got that right and shot bru for listening to the VivaLing English podcast.