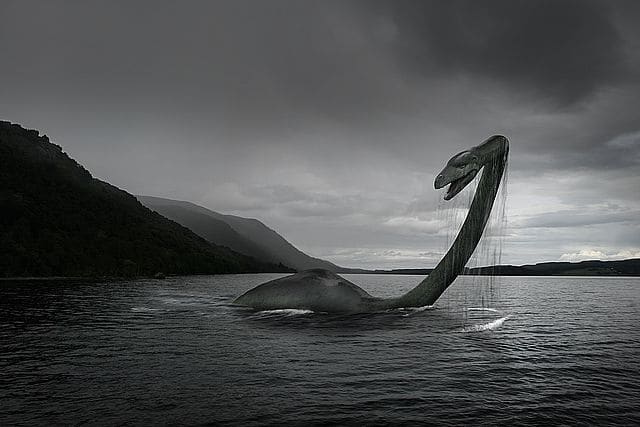 Have you heard of the Loch Ness Monster?

What do you think?

Listen to these experts discussing the possibilities and see who you agree with…..

But don’t be afraid – Loch Ness is a long way away.

Today we are going to talk about a very special subject, and we have 2 special guests to help us learn more.
First, let’s set the scene.
Imagine you are in the Scottish Highlands. The magnificent mountains and dense forests are all around you. You find a picnic table with a view looking over the loch.
Loch is a Scottish word for a lake with a connection to the sea – it’s the Loch Ness Monster – not the Lake Ness Monster

What a beautiful day! But suddenly, the weather changes. The sky is dark, the wind gets up and cold drops of rain come down. As you look at the loch, what’s that? Something moving. You can’t be sure what it is, but it has eyes and a long neck. And then it’s gone. But the mysterious noise? What was it?
This scene has happened to me and many others over many years. But before we investigate, I have a question.

There are many stories of monsters all over the world. Other monsters such as the Kraken and the Yeti are also famous, but what do these 3 monsters have in common: the Kraken, the Loch Ness Monster and the Yeti? Think about it. The answer will be at the end of this podcast.

But of course the main mystery is does it exist and, if so, what is it?
Today I have 2 special guests to give their opinions:
Professor Michael Dino from the University of Edinburgh believes that the Loch Ness Monster could really exist.
Timothy Truth from the website onlyfacts.com thinks it is impossible for the Loch Ness monster to exist.
Let’s listen to what they say and think about who has the best arguments.
The VivaLing English Podcast took theses arguments to the University of New York and asked the most intelligent experts to test them. I want you to listen carefully and see if you agree with the experts.
Who is right?

Let’s listen first to Professor Michael Dino.
Vivaling: “Professor Dino, could you please tell VivaLing English Podcast why do you believe that the Loch Ness Monster could exist?”
Professor Dino: “There are 3 reasons why I believe the Loch Ness Monster exists.
First, the loch is very deep, dark and unexplored. There is no reason why a large animal, which only needs to eat fish, could not survive for thousands of years.
Secondly, people say that for the monster to survive so long it would need a family or it would die. This is not true. Many reptiles and fish do not age and die in the same way as mammals. If they are not in danger, they continue to live forever.
Thirdly, the plesiosaur is a well-known dinosaur that lived in lakes just like this. The crocodile also looks like a dinosaur, so probably the monster is a plesiosaur that survived from the Cretaceous Period.”
Vivaling: “Thank you, Professor. Very interesting.”

As you know, it is always important to hear both sides of the argument, so let’s hear what Timothy Truth has to say.
Vivaling: “Timothy, or should I say M.Truth, what do you think about the Loch Ness Monster?
Timothy Truth: “The professor’s arguments are completely ridiculous. Children need to know the truth. There are no monsters. I have 3 reasons why it is impossible.
For a start, all the photos and evidence produced until now have been proved to be fakes.
Secondly, if there was a monster, it would have been discovered in the scientific expeditions using submarines that explored the loch.
Thirdly, stupid people have always invented stories: fairies, ghosts, princesses that live in castles. None of these things exist, and children have to know the real world.”
Vivaling: “Thank you, M.Truth. Very interesting.”

But, what do you think?
Who has the best arguments?
Do the experts from New York University agree with you?
The result was that Timothy Truth is wrong.
Why? Because he said that it is not true that princesses live in castles. This is, in fact, true. Many princesses have lived in castles.
So, the winner of the argument is Professor Michael Dino, and the result is that, yes, the Loch Ness Monster could exist.

So, let’s go back to my original question.
What do these 3 monsters have in common: the Kraken, the Loch Ness Monster and the Yeti?
None of them have been proved to exist, but they are all based on real animals: the Kraken on the giant squid, the Yeti on the mountain gorilla and the Loch Ness monster on the pleisiosaur.
The mystery lives on. Does the monster exist? I can’t tell you because I don’t know, but yes it could.
Thank you for listening. Goodbye.