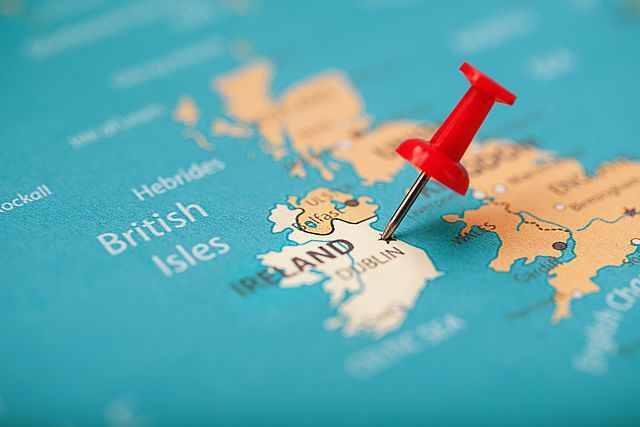 There are many places you can travel to if you want to improve your English.

Learn more about Ireland in this podcast and check your understanding with 5 simple questions.

Travel Tips – Travelling in the British Isles: The Republic of Ireland

The VivaLing English Podcast travel series gives you information about different countries around the world where you can have fun, relax and improve your English.
In Europe, English is the first language in the United Kingdom (which consists of England, Wales, Scotland and Northern Ireland) and the Republic of Ireland.
Today, we are going to find out more about why you should visit Ireland, but first I have a question for you.
St. Patrick’s Day is a famous celebration all over the world. People dress up in green, play traditional Irish music and parade through the streets. Some people even drink too much Guinness (the famous black beer made in Ireland), but where did the first St. Patrick’s Day parade take place: Dublin (the capital of Ireland), Tipperary (a small country town in Ireland), London or New York?
Answers, as usual, at the end of this podcast.

Why should you visit Ireland? I’m going to give you 5 reasons. Each reason will contain a fact about Ireland. Pay attention because, when I finish, I will ask some questions to check how much you have understood.

Ireland has a reputation for cool, rainy weather, and it’s true. In general, the temperature in Ireland in the summer is rarely above 20 degrees. These days, the south of Europe is often too hot in the summer, so escape the heat and relax in the cool of Ireland. One advantage of this cool weather is that there no snakes in Ireland. You can walk around with no shoes and socks, and there is no need to be afraid. The legend is that Saint Patrick chased the snakes out of Ireland, but don’t believe it. In fact, it is the climate that is not appropriate for snakes.

If you enjoy castles and ancient history, Ireland is the place for you. There are ancient Celtic sites, manor houses and castles all over the country. One of the most interesting castles is called Blarney. Irish people have a tradition called “Kissing the Blarney Stone.”It’s not easy as you have to lean out under a tower and kiss a piece of old stone. Why do Irish people kiss the stone? The answer is that it gives you magic powers, something that Irish people value very highly. To run faster? To make more money? To be more attractive? No. If you kiss the Blarney stone, you will be able to speak well and tell better stories, something Irish people do better than anyone else.

Which brings us to point number 3 – the people

Irish people are friendly and talkative, ideal for you to improve your English. They also love using expressions. Irish people love to be in the company of others. One expression is that “two people shorten the road.” There is an old story about a father and son who travelled to England. The father was angry when his son didn’t know how to make the road shorter. The son asked his wife and she told him, “Everyone knows that storytelling shortens the road.” The son then told his father a story and time went by quickly. The Irish people believe that, if you travel in company, the journey will go faster, but don’t forget to kiss the Blarney Stone first.

Ireland is famous for beer and whiskey, and it is true that the Irish drink more beer per head than any other country in the world except for one (the Czech Republic to be precise), but they also love a good hearty meal. Irish food is not for the faint-hearted. Breakfasts include sausages, bacon, eggs, beans and toast. Irish stew is a mixture of potatoes, lamb, carrots, onions and sauce, cooked slowly to perfection and ideal on a winter’s day. The Irish love potatoes so much that they even make pancakes out of them. One of the reasons there are so many Irish people all over the world is The Great Potato Famine. This happened from 1845-1849 when the potato harvest failed due to disease, and the Irish had nothing to eat because they depended so much on the potato. As a result, many Irish people emigrated to the UK, Australia and the United States. So eat potatoes, but don’t depend on them too much.

A trip to Ireland is not complete without music. Traditional Irish folk music is played in pubs all over the country, and famous stars such as the band U2 and Van Morrison are famous all over the world. The harp – a large stringed instrument – is, in fact, the national symbol of Ireland. Ireland is the only country in the world to have a musical instrument as its national symbol, so they really must love music. Ireland has won the Eurovision Song Contest 7 times, more than any other country.

As I said at the beginning, I hope you have been paying attention because I am now going to ask you some questions.
1. What animal does noe exist in Ireland?
You could say the tiger or the polar bear or even the dragon because they do not exist either, but the correct answer is snake.
2. Why do Irish people kiss the Blarney Stone?
So that they can tell better stories
3. What expression do Irish people say about having company when travelling?
Two people shorten the road.
4. What vegetable is the most important in the Irish diet?
The potato
5. What is the national symbol of Ireland?
It is a musical instrument called the harp.

If you got all of the answers right, it’s time to plan your trip to Ireland, and don’t forget to kiss the Blarney Stone. But, before we go, let’s go back to my original question
Where did the first St Patrick’s day parade take place: Dublin (the capital of Ireland), Tipperary (a small country town in Ireland), London or New York?
Well, if you said Dublin or Tipperary, I understand your logic because they are both in Ireland but, in fact, the correct answer is … New York, somewhat of a surprise, but not when you consider how much Irish people emigrated to the United States.

Thank you for listening and goodbye.

Attribution – some sound effects courtesy of Mike Koenig and Daniel Simion on SoundBible.com