Tapas, paella, sangría, jamón,… A lot of people around the world know and have even tried these typical dishes at least once in their lifetime. However, there are plenty of different local Spanish dishes which are more typical in Spain and even tastier than these world-known ones. I chose 5 dishes (although there are many more) from all around the “Península Ibérica”.

This delicious dish from Galicia (northwest Spain), can be challenging for those who don’t like or have never tried seafood before. “Pulpo” means octopus, and when it is fresh and cooked well… it melts in your mouth! It is usually served on a bed of boiled and cut potatoes, and has a drizzle of olive oil and a touch of paprika on top. 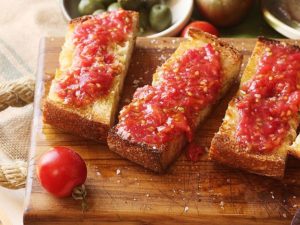 Originally from Catalonia (northeast Spain), although you can find similar versions of it in other Mediterranean countries. It is made with just 4 ingredients: toasted bread, garlic, olive oil and salt. You can eat it by itself or with cheese, jamón, prouscitto… almost anything!

If you ever go to Madrid (the capital of Spain) you should try this typical sandwich of fried squid rings. So simple but surprisingly good!

Everybody knows paella, but not a lot of foreigners know that paella is originally from Valencia and is not supposed to have seafood in it (in other areas of Spain they created their own “seafood” version). The original paella valenciana typically uses rice, “judía ferradura” -a type of green beans-, “garrofón” -a special type of big white beans-, chicken, rabbit, tomato, water, salt, olive oil and saffron. If you are ever in Spain, you will need to know that Thursday is Paella day in every Spanish food restaurant!

From the south of Spain, this typical dish is made for hot weather. A cold soup, easy to make at home. The main ingredients are: tomato, cucumber, green peppers, olive oil, bread, vinegar and garlic. Quite light and refreshing!

Why you should make a language study trip to France

VivaLing featured in The AsiantParent : 5 myths about raising a multilingual...
Scroll to top