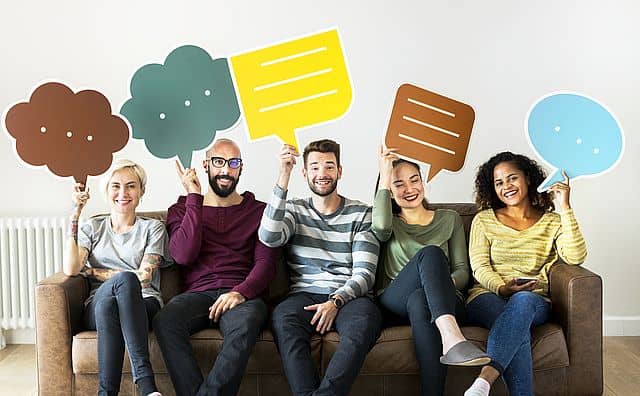 The VivaLing ViLLA method – innovative and constantly enriched thanks to the latest scientific reports in neurolinguistics – has built its identity around a linguistic theory dating back to the 1970s, born in the Anglo-Saxon world.

A movement born in the USA and in the United Kingdom from a Hungarian linguist.

The principled communicative approach to language teaching was born in 2009 from a small revolution in thinking by a Hungarian linguist, Zoltán Dörnyei, then professor at the University of Nottingham, who was keen to structure the communicative approach already developed by his Anglo-Saxon peers in the past decades. The latter, which was already in use in the world of language teaching, needed only to be popularised and developed for better application in everyday life.

Before them, was predominating the audio-linguistic method, a method widely used since the 1960s and was still practiced in the world of academic teaching, was based mainly on exercises and memorization. Showing its limits in terms of the development of communication skills, it was about to be overturned by the arrival of a new innovative approach.

From classical to pragmatic language learning

Indeed, the audio-linguistic approach had shown its limits – as a whole generation of frustrated adults who were almost unable to express themselves in a foreign language, despite years spent in the classroom, testify. A new era was dawning thanks to the communicative language teaching, the fruit of neuroscience and a broad range of teaching experience.

The communicative approach, implemented by some teachers in the 1970’s, was now focusing on the learner’s participatory experience and use language tasks that were less academic and more in tune with the modern world. Scripted and repetitive dialogues would be replaced by playful interactions, problem-solving exercises and spontaneous role-playing, for greater learning fluidity. Later, in the late 2000’s, the principled communicative approach would surface as an even more efficient pedagogy – structuring it all. 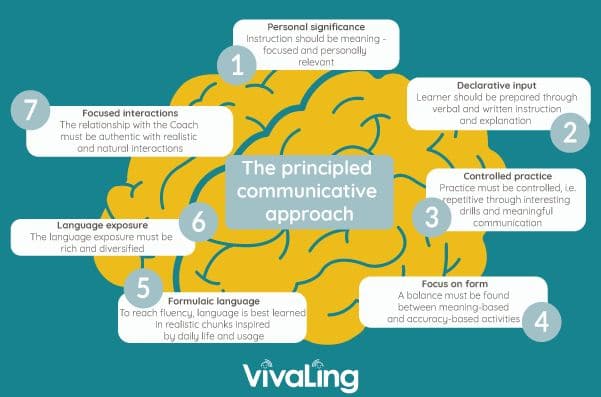 The principled communicative approach adopted at VivaLing offers its teachers a fundamentally structured pedagogy through 7 core principles. Learning must be meaningful to the learner and clearly explained through the principle of declaration, during which clear and concise rules and examples are provided. The learner can then interpret and repeat, allowing awareness and appropriation of competence.

The session takes place through structured practical activities, similar to the physical and psychological preparation of a musician or an athlete. The teacher must maintain an optimum balance between meaningful session content and adapted materials, while developing the formal language necessary to meet the need for modern and realistic communication.

For this reason, our coaches practice a spontaneous and functional conversation with their learners, while taking care to provide them with a rich linguistic contribution during the sessions.

Linguistic success based on a return to the origins

Zoltán Dörnyei’s principled communicative approach is in fact largely inspired, by a mechanism that has proven itself for millennia, the fantastic neuro-linguistic alchemy of learning the mother tongue. Haven’t we all successfully learned our native language, instinctively, in our early years, by communicating functionally and spontaneously with our parents and educators?

This skill is particularly well developed in young children, allowing them to absorb a phenomenal amount of linguistic elements and to multiply language acquisition with ease. Proof of this is Layla, 3 and a half years old with all her teeth, who is now learning Spanish at VivaLing with Nuria after having assimilated French and English, her two native languages and Greek, the language of her adopted country.

Are you passionate about language teaching? Discover a video conference by Zoltán Dörnyei at the University of Cambridge, in English.